A History of Barbers 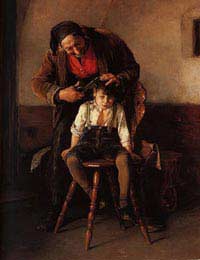 Razor blades have been found among the relics of the Bronze Age, so it is fair to say the barber’s art of cutting hair and shaving beards is an ancient trade. Early records show that barbers were prominent members of their tribe – either medicine men or priests. There were primitive men who believed that bad spirits entered individuals through the hair and inhabited the body. The only way to drive these bad spirits out was to get a haircut.

Ancient Egyptian monuments and papyrus show people being shaved and it is known that Egyptian priests were shaved every three days. In Greece, barbers had an important place in society from the fifth century BC, while the Romans first had barbers in 296 BC, when Ticinius Mean brought the art of shaving from Sicily. Just like today, these barber shops were the place to go to gossip. They were filled with the chatter of free men, whose absence of beards set them apart from the slaves. The Romans held barbers in such high regard that a statue was erected in memory of the first Roman barber.

Shaving even played a role in military strategy. Alexander the Great’s men were defeated by the Persians, who grabbed hold of their enemies’ beards and pulled them to the ground before spearing them. Alexander later ordered his troops to be shaved so that they would be able to use the same tactics.

Barbers had far more versatile roles then and did the jobs of dentists and surgeons too, performing tooth extraction and bloodletting, enemas and wound surgery. The first official organisation of these barber-surgeons was formed in 1096 in France after the wearing of a beard was banned by the archbishop of Rouen.

As medicine started to become more defined as a field of its own, efforts were made to separate barber-surgeons from the academic surgeons. The French were the first to achieve this, with the College de Saint Come, established around 1210 AD in Paris, identifying barber-surgeons as surgeons of the short robe and academic surgeons as surgeons of the long robe. By the middle of the 13th century a school was established in France by the Brotherhoods of St Cosmos and St Domains in an effort to instruct barbers in surgery.

The world's oldest barber organisation, still known in London as the Worshipful Company of Barbers, was formed in 1308. In 1391, the guild of French barbers and surgeons was established and by 1505 the University of Paris allowed entrance to barbers. Ambroise Paré (1510-1590), the father of modern surgery and the most famous surgeon of the Renaissance period, was himself a common barber-surgeon until he embraced medicine.

In England in 1462, Edward IV established the Company of Barbers and 30 years later surgeons established their own guild. Henry VIII merged the two guilds in 1540 by forming the United Barber-Surgeons Company, but they were still set apart. Barbers were not allowed to perform surgery except for bloodletting and teeth-pulling and displayed blue and white poles, while surgeons were forbidden to cut hair or shave people and displayed red and white poles. France’s Louis XV decreed in 1743 that barbers could not practice surgery and two year's later several acts passed by George II separated surgeons from barbers in England.